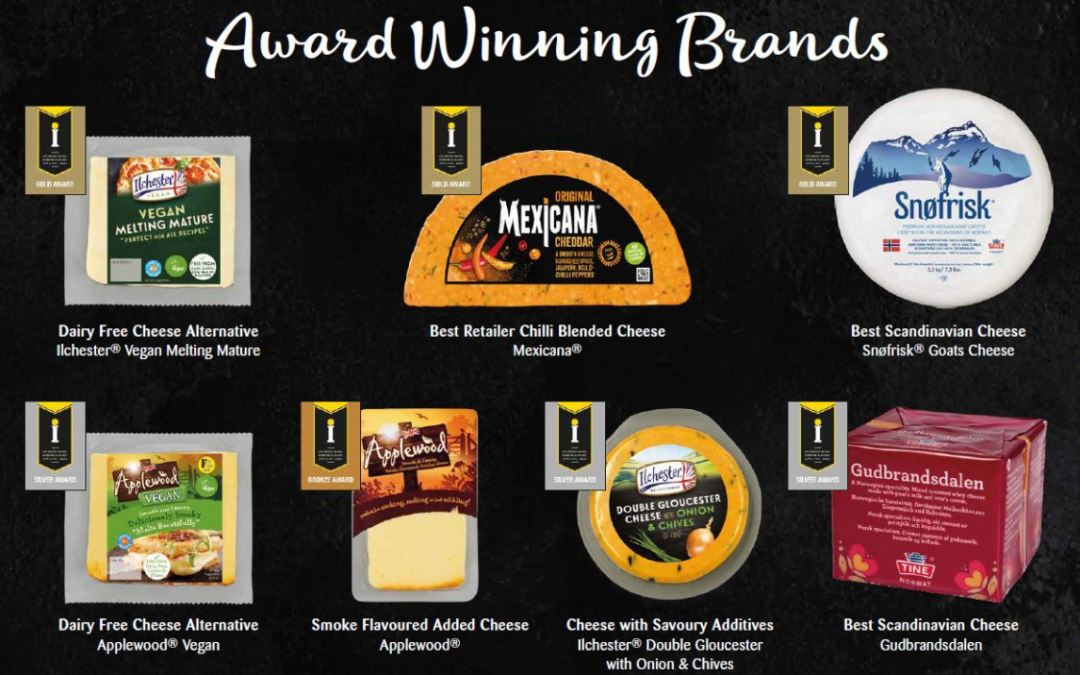 The UK’s number one blended cheese supplier, Norseland, has a lot to celebrate this month after winning seven accolades at the prestigious International Cheese Awards 2022 in Staffordshire.

Norseland, which was the first dairy company to launch plant-based alternatives to its best-selling brands, won the Gold Award in the Dairy-Free Cheese Alternative category for the Ilchester Vegan Melting Mature, the first vegan cheeze from Norseland’s blended and snacking cheese brand, Ilchester.

The Ilchester Vegan Melting Mature, which launched last summer and has been described as the ”best vegan melting cheeze on the market” by the Independent, scooped the sought-after award at the cheese industry’s highly regarded awards ceremony.

Ilchester also won the Silver Award in the category for ‘Cheese – any variety that contains savoury additives’ for its Ilchester Double Gloucester, Onion and Chives Cheese.

The Mexicana Deli Cheese is a British cheddar packed full of spicy bell and jalapeño chilli peppers, Snofrisk Goats Cheese is a semi-hard cheese, its taste is tangy with a characteristic yet mild taste of goat’s milk, while Gudbrandsdalen is an award winner for its brown fudge-like appearance with a distinct sweet taste of caramel.

The multi-award-winning Applewood Vegan, the plant-based alternative to the UK’s number one smoky cheese, won the Silver Award Dairy Free Cheese Alternative in the ‘Cheese – any variety that contains savoury additives’ category. Norseland launched Applewood Vegan in October 2019 and was the UK’s first major cheese brand to launch a vegan cheese alternative. The Silver Award is the ninth award for the vegan cheeze.

Applewood®, which was also recognised at the International Cheese Awards, secured Bronze in the ‘Smoked Flavour Added Cheese’ category.

Talking about the awards’ success, Lisa Harrison, Marketing Manager for Norseland, said: “We are over the moon with the number of awards that we have won at the International Cheese Awards 2022, which are highly respected in the industry and across the world. The competition is always very tough, so we are really thrilled that our cheeses, including both dairy and plant-based, have been recognised. And the icing on the cake is the Gold award for the Ilchester Vegan Melting Mature in the Dairy-Free Cheese Alternative category – the first award for our newest plant-based cheeze.”