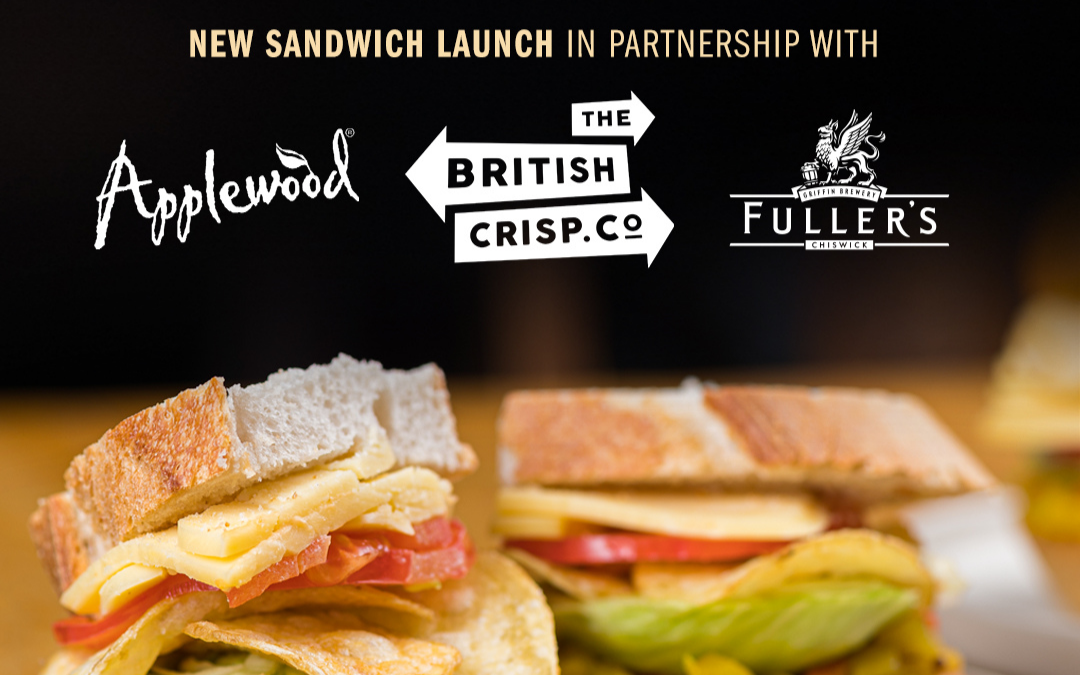 The UK’s number one smoky cheese, Applewood®, is set to create what could potentially become the UK’s favourite sandwich filling after teaming up with the British Crisp Co and Fuller’s to create the Smoky Applewood Cheddar and British Crisp Co Cheese and Onion Crisp Sandwich, which will be appearing on menus in a number of Fuller’s pubs across the South of England to celebrate British Sandwich Week (22-28 May).

Everybody loves a crisp sandwich but you rarely, if ever, see a crisp sandwich on the menu of your local pub so the team at Applewood put their heads together with the bosses at the British Crisp Co to create the mouthwateringly delicious Smoky Applewood Cheddar and British Crisp Co Cheese and Onion Crisp Sandwich. And then they approached Fuller’s who agreed to put the sandwich on their menu at a limited number of its pubs, including The Admiral Nelson and The Cabbage Patch, both in Twickenham, The Distillers in Hammersmith and The Hercules in Lambeth.

There is also a plant-based option, featuring Smoky Applewood Vegan® and British Crisp Co Salt and Vinegar Crisp Sandwich in a bun with heritage tomato and golden beetroot piccalilli.

Lisa Harrison, Marketing Manager for Applewood, says: “A poll of 2,000 adults* conducted last year found that Brits typically eat 35 crisp sandwiches each per year, with 14% of people saying they love nothing more than a packet of salt and vinegar crisps in their sandwich.

“And then when we thought about it, we realised that while it’s easy to make a crisp sandwich at home, it’s very rare to find a pub or café that has crisp sandwiches on their menus, so we spoke to Tom Lock, the Founder of The British Crisp Co with the idea, who then suggested we team up with Fuller’s to get this tasty snack on its menus.

“The British Crisp Co has a fantastic selection of hand-cooked crisps and we felt that the smokiness of our Applewood cheese is the perfect complement to the tanginess of the British Crisp Co’s Sea Salt and Cider Vinegar crisps – it really is a winning combination.

“And with Applewood being a great British cheese, we really wanted to work with a company, like The British Crisp Co, whose snacks are made in Britain with high-quality locally-sourced ingredients. Getting Fuller’s to add the sandwich to its menus really makes for a truly remarkable partnership ­– and a great way to celebrate British Sandwich Week.”

Fuller’s Director of Food, Paul Dickinson says: “We wanted to have fun this British Sandwich Week and to celebrate all things British in the run-up to the Jubilee. The idea of a cheese and crisp sandwich creation seemed rather fitting.  The recipe isn’t exactly rocket science, but it is a classic go to and delicious every time, which we know our customers will love.”

Great British Applewood Cheese and Crisps sandwich is available in The Admiral Nelson and The Cabbage Patch, both in Twickenham, The Distillers in Hammersmith and The Hercules in Lambeth and a limited number of other Fuller’s Managed Pubs and Hotels.

*Survey conducted by One Poll in April 2021